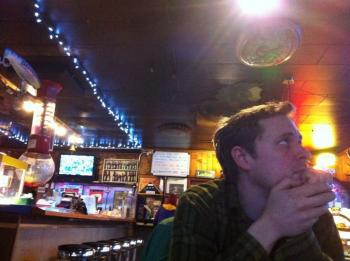 KPTZ DJ Seth Raymond ruminates on cheap burritos, CCR, and pounding on the drums. See what else he has to say as you get to know a DJ. . .

What can listeners expect to hear on your show? I try to mix it up as best I can, but you will certainly hear some catchy rock n’ roll tunes. I love finding a song that has a certain quality. That good, honest quality that gets you moving, or breaks your heart, whatever the artist really intended. When a song really nails that, then it doesn’t matter what genre it is, it just works for me. You’ll just have to tune in and check it out.

Do you play music yourself? Not a lot at the moment, but over the years I have played in several bands. Guitar mostly, but I have played bass for a couple of projects, and I love to pound on the drums when ever I get the chance. Not much in life feels quite as good as finding a groove and banging out a beat. That said, I’m really not a very good drummer.

If you could have one super power, what would it be? Shape shifter.

What’s your favorite local spot? I grew up running around in the bunkers and there is still something satisfying about running around up there. Nostalgic maybe. The bunkers really haven’t changed much over the years and I love that. Hats off to the Uptown Pub though. I’ve been frequenting that burrito stand up at the gas station too. Not bad.

Who would be your ideal radio guest? Mike Watt of the minutemen. Or maybe Chrissie Hynde of the Pretenders. Hard to pick just one. I have yet to do a real interview on my show, but both of those musicians seem like people that I could really chill with. Have them up to the station and then have them over for dinner, you know what I mean?

Top three pastimes: Listening to music seems a bit too obvious here so I’ll skip that. I bought a boat a couple of years ago. That has to count as two right there: sailing the boat and fiddling around with the boat. I love partaking in a killer BBQ. Hanging out with friends and eating good food. That’s defiantly a favorite pastimes. It’s winter, so I should say reading books and taking baths, things like that, but I can’t. I really miss summer.

What is the last thing you regretted playing on your show? I played that Credence Clearwater Revival song Don’t Look Now. I messed up and somehow cut the first few bars out of the song. I don’t regret trying to play the song–I love that song–but I regret playing it and messing it up. It would have been a sweet transition from the last song too. I blew it.

What song do you wish you could play on your show every time? Oh, there is no way that I can pick just one. I could pick about five Kinks songs and be happy playing them week after week (and I do actually). There is a song by The Nerves called When You Find Out that I’m in love with right now. Or there’s I Want to See the Bright Lights Tonight by Richard and Linda Thompson. That song really got under my skin in the best kind of way. I’ll stop there.

What is the last piece of music you listened to? Fleetwood Mac–The Chain.

Seth Raymond can be heard on Wednesdays from 10am to Noon.